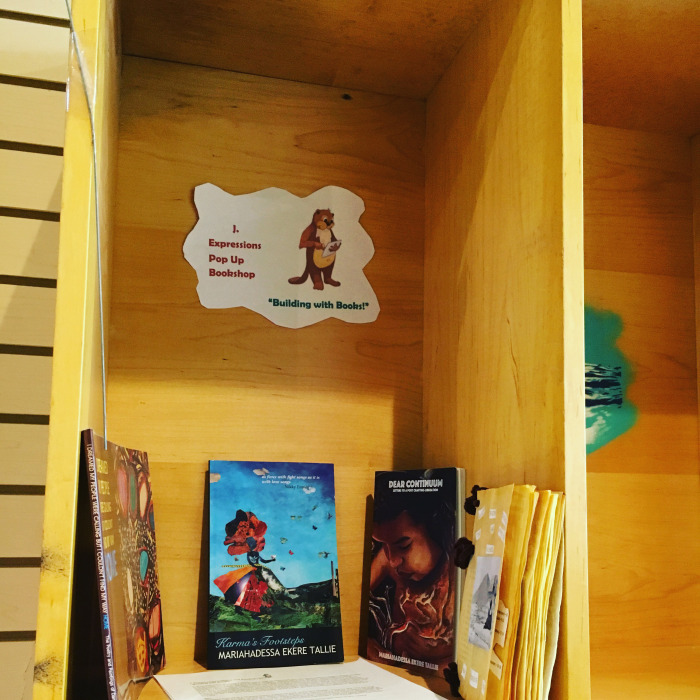 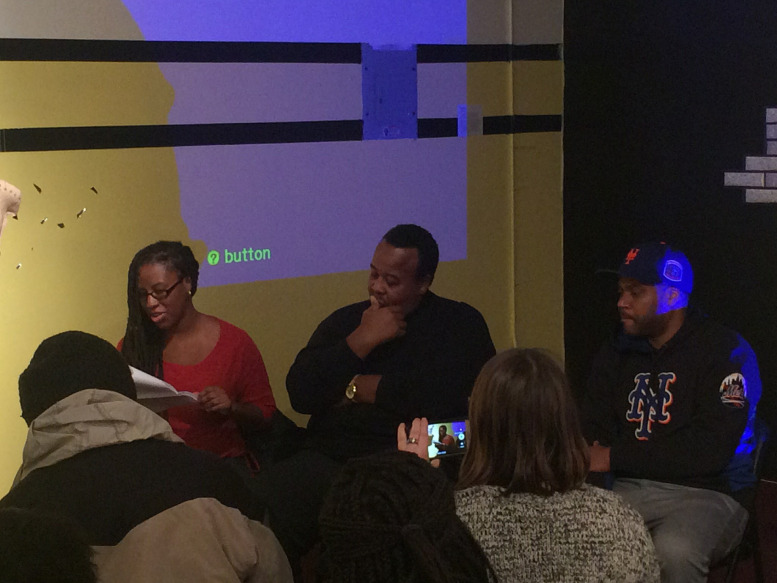 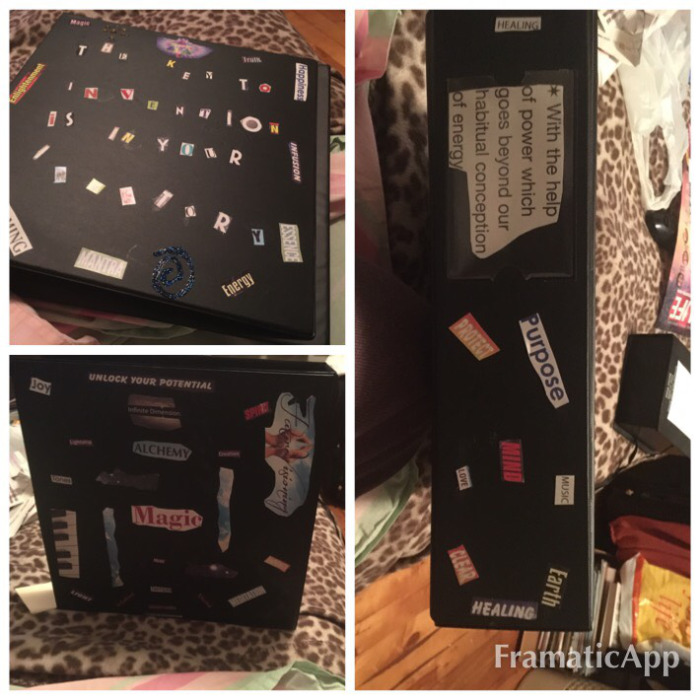 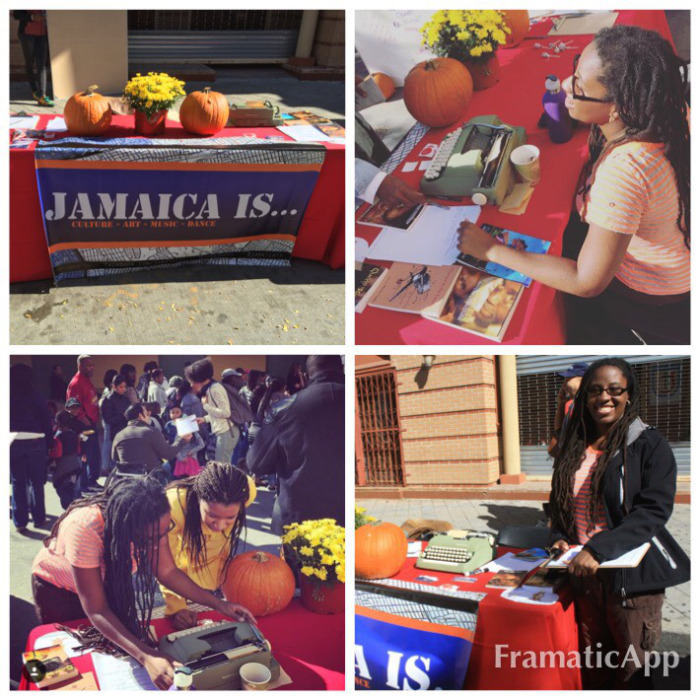 Writer Sherese Francis’s work was featured in issue #9 of Newtown Literary, and was previously featured in Issue #6. For more of Sherese’s work, check out Futuristically Ancient; you can also keep up with her work with J. Expressions. She interviews herself below:

Yes, I did! And yes, 2016 was a year of hardships, opportunities, and figuring out what I want for myself. My first half of the year was mostly centered on building up towards the first Queens book festival, along with working on No Longer Empty's Jameco Exchange Exhibition. But when it was done, I realized how burned out I was. So the months after August leading up to the New Year, I needed to do a reevaluation and some self-reflection. And I ended up with the motto: "Understanding Your Worth".

Oh, I like that motto: "Understanding Your Worth"! What does it mean for you?

Well, for a long time I let fear rule me. I had a fear of failure and social anxiety that prevented me from going after certain things. Then, a couple of years after college, I decided to take a chance on opportunities presented to me, such as doing the Queens Book Festival. I had to understand that I was worthy enough to do something like that, and it has been a great opportunity that has allowed me to connect with various people. But in doing a project of that magnitude, I lost balance and would push projects that I was personally passionate about to the side. Working with No Longer Empty and starting J. Expressions pop-up bookshop helped me to see that. I learned that I can’t say yes to everything out of fear that another opportunity that great wouldn’t come along, especially at the expense of something important to me; sometimes I have to say no or else I will be drained of my spirit, my energy, my purpose, myself.

Wonderful! So how are you executing that motto in the New Year, and finding that balance again?

Well, I rededicated myself to my blog, Futuristically Ancient. I committed myself to do at least one post a week. I recently debuted my first blog video, too, featuring a couple of local visual artists talking about their work. Additionally, I started a new blog series called StoryCraft, where I showcase and mention my writing projects in progress. Speaking of writing, I rededicated myself to my writing. Again, thanks to No Longer Empty, I had a chance to showcase and read an excerpt from the fantasy novel I am writing now at an another exhibition they did in Jamaica. Doing that pushed me to go full force on writing it again. I tried doing so before I left for Barbados as part of the NaNoWriMo and during my trip, but that didn’t quite work out.

Oh, you went to Barbados! How was that?

Not what I expected. My mother became ill only a couple of days in, and so a week and a half was spent taking care of her. Plus adjusting to the heat, the flies, the mosquitoes, and the small space we were staying in added to the difficulty. But don’t get me wrong, Barbados is a beautiful place, and when my mother felt better, we did get to see my family (and I have a lot I didn’t know about), we were able to see some sights and go to a few events in honor of their independence anniversary, and I was able to see Barbados beyond the "touristy" part of it. New experiences like that can be the fertilizer for new creative inspiration.

Wow, that sounds like a lot. Speaking of creative inspiration, what was one that you had?

I did receive a lot of inspiration. Some for my novel and some for poetry as well. For example, both my mother and I had a beach day, and since neither of us can swim, we only went in up to our waist. The symbolism of that and the water made me think of motherhood, wombs, feminine power, ancestry, and lineage. A poem might result from that.

Great! You have been mentioning your novel. Can you tell us a little about it?

Of course! It's called The E, and it is a science-fiction/fantasy story set in Jamaica, Queens, and inspired by the Underground Railroad and subway culture. It follows a young woman named S.W. Isibe as she learns that she is part of a team of underground agents with magical powers, two of whom are inspired by Harriet Tubman and William Still. They travel and mostly live in a quantum time-traveling, shapeshifting subway E train. S.W. is pulled into a world beyond her current imagination, and as she explores this new world, she is also exploring herself and her own inner strength.

That sounds interesting! I look forward to getting a copy. What has the process been like? And do you know when you will be done with it?

It has been a process that has tested my confidence as a writer. I have been mostly a poet as a writer, and so delving into fiction is like stepping into a new territory where I am not completely fluent with the language yet and learning as I go along. But I have learned to use my strengths as a poet and as a researcher to help me flesh out both my short stories and my longer novel. Fiction is filled with poetic language and with the concept of my book, learning historical facts, but the task for me has been developing three-dimensional characters and a compelling plot, which is good mental exercise. Hopefully, within a few months I will finish the manuscript for the novel, but definitely before the end of the year. Then I will start sending it out.

I hear that! People sometimes forget that just because someone is a writer doesn't mean that they can easily write every genre. Now tell me about J. Expressions.

It was an idea I came up with after finding out Queens did not have many bookstores, outside of the Astoria Bookshop and a few niche ones, like Libreria Barco De Papel and Topos Bookstore. Living in Jamaica, Queens, I am far from Astoria, and the Barnes and Noble closed in Forest Hills, so we don't really have much access here. Inspired by other initiatives like Queens Bookshop, I wanted to create a project centered around the southeast Queens community. The project showcases authors and other literary artists from the southeast Queens area.

How has the project been going so far since you started? Where can we find out more about it?

It is building slowly. I have tabled since July when I started at Jamaica Market Harvest Festival and at the Afrikan Poetry Theatre's Kwanzaa celebration. I am applying for grants so I can do a series of literary events in the Jamaica area this year. Those interested in collaborating or helping to build the project can visit my Instagram, @jexpressionsbookshop and my website, jexpressionsbookshop.tumblr.com.

Are you working on any other projects?

Besides the five million other things I am working on, I decided to start a Wattspad and I'm currently writing a short story series, A Stitch in Time, which you can read here. I am still writing poetry, and writing and revising a few manuscript ideas. I am also becoming more interested in ways to combine writing and visual arts. For example, last year I started an Instagram series, #InYourQ where I took pictures of things I saw in Queens and then would use the pictures as writing prompts. The other day, I decided to decorate a binder that I had with words cut out from a magazine. I call it a binder full of magic. Maybe I will do it as a larger project -- who knows! Also, I had a couple of artists show interest in collaborating by creating work inspired by my writing, so hopefully something is there!

Sounds exciting! What's coming up next for you?

So what else keeps you centered besides writing?

I love music and dance. I am such an old soul. My favorite genres of music to listen to are classic soul music and funk music. When I hear voices like Chaka Khan, Al Green, Gladys Knight and the Pips, Shuggie Otis, Isley Brothers, and Mother's Finest, it lifts my spirits. I don't hear that in a lot of today's mainstream music. And I dance, usually by myself, as a way to get out of my head. As a writer, I tend to think a lot and that can be draining. Dance grounds me and reenergizes me. I've been thinking of joining dance classes. We'll see.

With the current political and social climate, what advice do you have for writers, artists, and others who are distressed by it all?

I heard a poet the other day say that we must speak our truth because truth is poetry. And I believe going forward, we need to continually remind ourselves of that -- Speak our truth, no matter how inconvenient it may be for others. Be as you as you can be and don't let anyone tell you who that "you" is. We have someone who is taking (and I do meaning taking) the presidential office and he arrogantly announces himself as our savior, when he is more like a charlatan, a snake oil salesman. He pretends to be something he is not, so one of the best things we can do is be honest about who we are. I've been learning to trust more and more my inner voice and how to let it guide me. I recently read my horoscope from Chani Nicholas and the horoscope matched my motto for this year, and I was pleasantly surprised that I knew what I needed. We need to be honest about ourselves and what we need.

Thank you, Newtown Literary, for including my poetry in your journal and giving Queens writers another opportunity to showcase our work and our borough.

Thanks for the interview!

Q&A with Maisy Card, author of These Ghosts Are Family